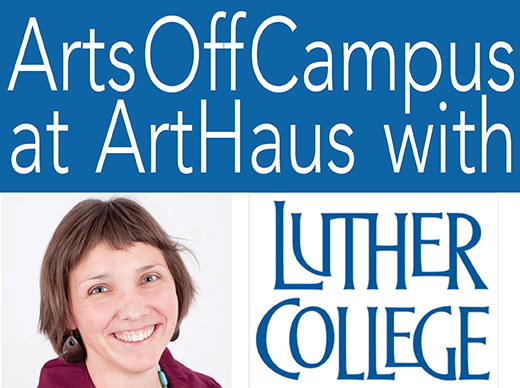 Come to listen and learn with dynamic and thought-provoking conversations where Luther College Humanities faculty share their research and ideas with the community in the cozy setting of ArtHaus.

Dr. Kate Elliott is Associate Professor of Art History at Luther College. She is interested in issues surrounding the representation of Native Americans.
She will speak about a pair of illustrated beer trays produced in 1902 to advertise Mankato, Minnesota’s short-lived Standard Brewing Company. Backed by out-of-town financiers, Standard Brewing was anxious to break into the lucrative Minnesota beer market. They launched an aggressive advertising campaign, which included issuing trays emblazoned with images of the 1862 execution of the Dakota 38, condemned to death for their assumed involvement in the U.S. Dakota-War of 1862. From a 21st century perspective, the image is chilling, but it points to a more specific and predatory side of cultural appropriation in advertising. She’ll talk more about how and why a brewery might choose this kind of historical image in their advertisements.